Clicking on this link will produce the Complaints Procedure document.

Who can make a complaint?

This complaints procedure is not limited to parents or carers of children that are registered at the school. Any person, including members of the public, may make a complaint to Mengham Junior School about any provision of facilities or services that we provide. Unless complaints are dealt with under separate statutory procedures (such as appeals relating to exclusions or admissions), we will use this complaints procedure.

The difference between a concern and a complaint

A concern may be defined as ‘an expression of worry or doubt over an issue considered to be important for which reassurances are sought’.

A complaint may be defined as ‘an expression of dissatisfaction however made, about actions taken or a lack of action’.

It is in everyone’s interest that concerns and complaints are resolved at the earliest possible stage. Many issues can be resolved informally, without the need to use the formal stages of the complaints procedure. Mengham Junior School takes concerns seriously and will make every effort to resolve the matter as quickly as possible.

We understand however, that there are occasions when people would like to raise their concerns formally. In this case, Mengham Junior School will attempt to resolve the issue internally, through the stages outlined within this complaints procedure.

How to raise a concern or make a complaint

A concern or complaint can be made in person, in writing or by telephone. They may also be made by a third party acting on behalf on a complainant, as long as they have appropriate consent to do so.

Concerns should be raised with either the class teacher or headteacher. If the issue remains unresolved, the next step is to make a formal complaint.

Complainants should not approach individual governors to raise concerns or complaints. They have no power to act on an individual basis and it may also prevent them from considering complaints at Stage 2 of the procedure.

Complaints against school staff (except a headteacher) should be made in the first instance, to Odele Davies or Edward Harrison (the headteachers) via the school office. Please mark them as Private and Confidential.

Complaints that involve or are about the headteacher should be addressed to Chris Wotton or Julie Fraser (the Chairs of Governors), via the school office. Please mark them as Private and Confidential.

Complaints about the Chair of Governors, any individual governor or the whole governing body should be addressed to The Clerk of the Governing Body via the school office. Please mark them as Private and Confidential.

For ease of use, a template complaint form is included at the end of this procedure. If you require help in completing the form, please contact the school office. You can also ask third party organisations like the Citizens Advice to help you.

In accordance with equality law, we will consider making reasonable adjustments if required, to enable complainants to access and complete this complaints procedure. For instance, providing information in alternative formats, assisting complainants in raising a formal complaint or holding meetings in accessible locations.

We will not normally investigate anonymous complaints. However, the headteacher or Chair of Governors, if appropriate, will determine whether the complaint warrants an investigation.

Complaints received outside of term time

We will consider complaints made outside of term time to have been received on the first school day after the holiday period.

Scope of this Complaints Procedure

This procedure covers all complaints about any provision of community facilities or services by Mengham Junior School, other than complaints that are dealt with under other statutory procedures, including those listed below.

If other bodies are investigating aspects of the complaint, for example the police, local authority (LA) safeguarding teams or Tribunals, this may impact on our ability to adhere to the timescales within this procedure or result in the procedure being suspended until those public bodies have completed their investigations.

At each stage in the procedure, Mengham Junior School wants to resolve the complaint. If appropriate, we will acknowledge that the complaint is upheld in whole or in part. In addition, we may offer one or more of the following:

Withdrawal of a Complaint

If a complainant wants to withdraw their complaint, we will ask them to confirm this in writing.

Formal complaints must be made to the headteacher (unless they are about the headteacher), via the school office. This may be done in person, in writing (preferably on the Complaint Form), or by telephone.

The headteacher will record the date the complaint is received and will acknowledge receipt of the complaint in writing (either by letter or email) within 5 school days.

Within this response, the headteacher will seek to clarify the nature of the complaint, ask what remains unresolved and what outcome the complainant would like to see. The headteacher can consider whether a face to face meeting is the most appropriate way of doing this.

Note: The headteacher may delegate the investigation to another member of the school’s senior leadership team but not the decision to be taken.

During the investigation, the headteacher (or investigator) will:

At the conclusion of their investigation, the headteacher will provide a formal written response within 20 school days of the date of receipt of the complaint.

If the headteacher is unable to meet this deadline, they will provide the complainant with an update and revised response date.

The response will detail any actions taken to investigate the complaint and provide a full explanation of the decision made and the reason(s) for it. Where appropriate, it will include details of actions Mengham Junior School will take to resolve the complaint.

The headteacher will advise the complainant of how to escalate their complaint should they remain dissatisfied with the outcome of Stage 1.

If the complaint is about the headteacher, or a member of the governing body (including the Chair or Vice-Chair), a suitably skilled governor will be appointed to complete all the actions at Stage 1.

Complaints about the headteacher or member of the governing body must be made to the Clerk, via the school office.

If the complaint is:

If the complainant is dissatisfied with the outcome at Stage 1 and wishes to take the matter further, they can escalate the complaint to Stage 2 – a meeting with members of the governing body’s complaints committee, which will be formed of the first three, impartial, governors available. This is the final stage of the complaints procedure.

A request to escalate to Stage 2 must be made to the Clerk, via the school office, within 5 school days of receipt of the Stage 1 response.

The Clerk will record the date the complaint is received and acknowledge receipt of the complaint in writing (either by letter or email) within 5 school days.

Requests received outside of this time frame will only be considered if exceptional circumstances apply.

The Clerk will write to the complainant to inform them of the date of the meeting. They will aim to convene a meeting within 20 school days of receipt of the Stage 2 request. If this is not possible, the Clerk will provide an anticipated date and keep the complainant informed.

If the complainant rejects the offer of three proposed dates, without good reason, the Clerk will decide when to hold the meeting. It will then proceed in the complainant’s absence on the basis of written submissions from both parties.

The complaints committee will consist of at least three governors with no prior involvement or knowledge of the complaint. Prior to the meeting, they will decide amongst themselves who will act as the Chair of the Complaints Committee. If there are fewer than three governors from Mengham Junior School available, the Clerk will source any additional, independent governors through another local school or through their LA’s Governor Services team, in order to make up the committee. Alternatively, an entirely independent committee may be convened to hear the complaint at Stage 2.

The committee will decide whether to deal with the complaint by inviting parties to a meeting or through written representations, but in making their decision they will be sensitive to the complainant’s needs.

If the complainant is invited to attend the meeting, they may bring someone along to provide support. This can be a relative or friend. Generally, we do not encourage either party to bring legal representatives to the committee meeting. However, there may be occasions when legal representation is appropriate.

For instance, if a school employee is called as a witness in a complaint meeting, they may wish to be supported by union and/or legal representation.

Representatives from the media are not permitted to attend.

At least 10 school days before the meeting, the Clerk will:

Any written material will be circulated to all parties at least 3 school days before the date of the meeting. The committee will not normally accept, as evidence, recordings of conversations that were obtained covertly and without the informed consent of all parties being recorded.

The committee will also not review any new complaints at this stage or consider evidence unrelated to the initial complaint to be included. New complaints must be dealt with from Stage 1 of the procedure.

If the complaint is upheld in whole or in part, the committee will:

The Chair of the Committee will provide the complainant and Mengham Junior School with a full explanation of their decision and the reason(s) for it, in writing, within 5 school days.

The letter to the complainant will include details of how to contact the Department for Education if they are dissatisfied with the way their complaint has been handled by Mengham Junior School.

If the complaint is:

Stage 2 will be heard by a committee of independent governors.

The response will detail any actions taken to investigate the complaint and provide a full explanation of the decision made and the reason(s) for it. Where appropriate, it will include details of actions Mengham Junior School will take to resolve the complaint.

The response will also advise the complainant of how to escalate their complaint should they remain dissatisfied.

If the complainant believes the school did not handle their complaint in accordance with the published complaints procedure or they acted unlawfully or unreasonably in the exercise of their duties under education law, they can contact the Department for Education after they have completed Stage 2.

The complainant can refer their complaint to the Department for Education online at: www.education.gov.uk/contactus, by telephone on: 0370 000 2288 or by writing to:

Please complete and return to the school office in a sealed envelope with the name of the relevant person clearly written. They will acknowledge receipt and explain what action will be taken.

The complainant will receive a more effective response to the complaint if they:

The investigator’s role is to establish the facts relevant to the complaint by:

The complaints co-ordinator should:

Clerk to the Governing Body

The Clerk is the contact point for the complainant and the committee and should:

The committee’s chair, who is nominated in advance of the complaint meeting, should ensure that:

If a new issue arises it would be useful to give everyone the opportunity to consider and comment upon it; this may require a short adjournment of the meeting

Committee members should be aware that:

No governor may sit on the committee if they have had a prior involvement in the complaint or in the circumstances surrounding it.

We recognise that the complainant might not be satisfied with the outcome if the meeting does not find in their favour. It may only be possible to establish the facts and make recommendations.

Parents/carers often feel emotional when discussing an issue that affects their child.

Careful consideration of the atmosphere and proceedings should ensure that the child/young person does not feel intimidated.

The committee should respect the views of the child/young person and give them equal consideration to those of adults. 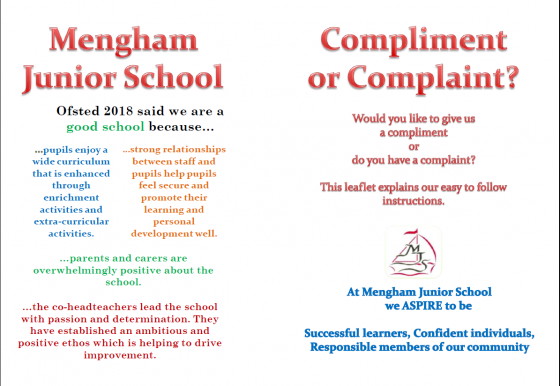